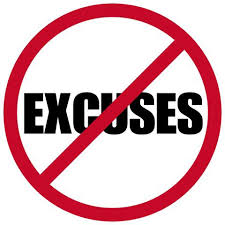 (noun) the success-threatening disease of

inventing a horrible future, that inevitably
results in complete, and horrible failure.

There is an automated mechanism inside your
consciousness that literally saves you from being
crazy.

(not that it will make any sense )

The Reticular Activating System controls your
attention, and helps you create a perception of
order out of an otherwise chaotic universe.

What do I mean?

You may notice that you don’t pay attention to
most of what you see, hear, feel, and think. For
example, if you’re reading this sentence… you’re
not paying attention to the skin on the bottom of
your feet – how it feels, how warm or cold your
skin is… or your breathing.

You may not notice the rate of your breathing at
all, if you’re reading this sentence – or did the
fact that I mention it cause you to take a deep,
slow breathe, and relax?

You don’t, because you can’t.

Why? And what does that have do do with excuses?
And what’s the failure disease, exactly?

Beliefs control your perception. Your RAS is an
automated unconscious mechanism that is there to
prove exactly what you want and believe.

Your nervous system is taking in an unbelievable
amount of data, that makes no sense until it’s
labeled with meaning, sorted for importance, while
other data is distorted, deleted, and generalized
so the Universe makes sense like you want it to.

Excuses are negative beliefs about the future.

They are beliefs that are not valid, because the
future is always paced out in time.

The past has absolutely nothing to do with your
future, other than being a useful playground of
learning.

Your current situation has nothing to do with your
future.

When you say “I can’t, because…” what you’re
actually doing, is casting a non creating belief
into your future.

A belief that you don’t want.

A belief that doesn’t serve you.

A belief that won’t help you get what you want.

Excuses are… a form of disease, called ‘Excusitis’
or the disease of failure.

See, there is no ‘I can’t, because’ because the
future doesn’t exist right now. Because you
create it as you live your life. Because it can
be however you believe it to be.

Because YOU can have anything that you want.

YOU can do anything that you want.

IF YOU BELIEVE YOU CAN!

Make it the Best Day Ever!